So with several pushes for devaluation and depreciation of the Malawi Kwacha, I recalled there is a way of assessing the exchange rate if a currency is over-valued or under-valued against another. So I did some research yesterday and came up with a script to help me with the assessment.

So we will have to define each of the two exchange rates Enominal and Eppp.
The source code is as follows: 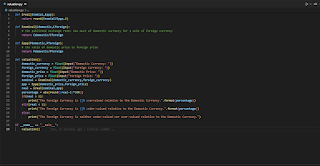 I have published the source code on https://github.com/kondwa/valuation
Let's have some examples:
It seems the script is in conformity with the IMF example on the Real Exchange Rate.
We can now try and apply it to the Malawi Kwacha relative to the Dollar:
Yesterday(15th August 2022), the nominal exchange rate was K1,020.00 to $1 and the price of Gold in Malawi was K41,000, while it was $58 in the USA. We evaluate the Real Exchange rate as follows:

This gives an evaluation that "The Foreign Currency is 44% overvalued relative to the Domestic Currency."